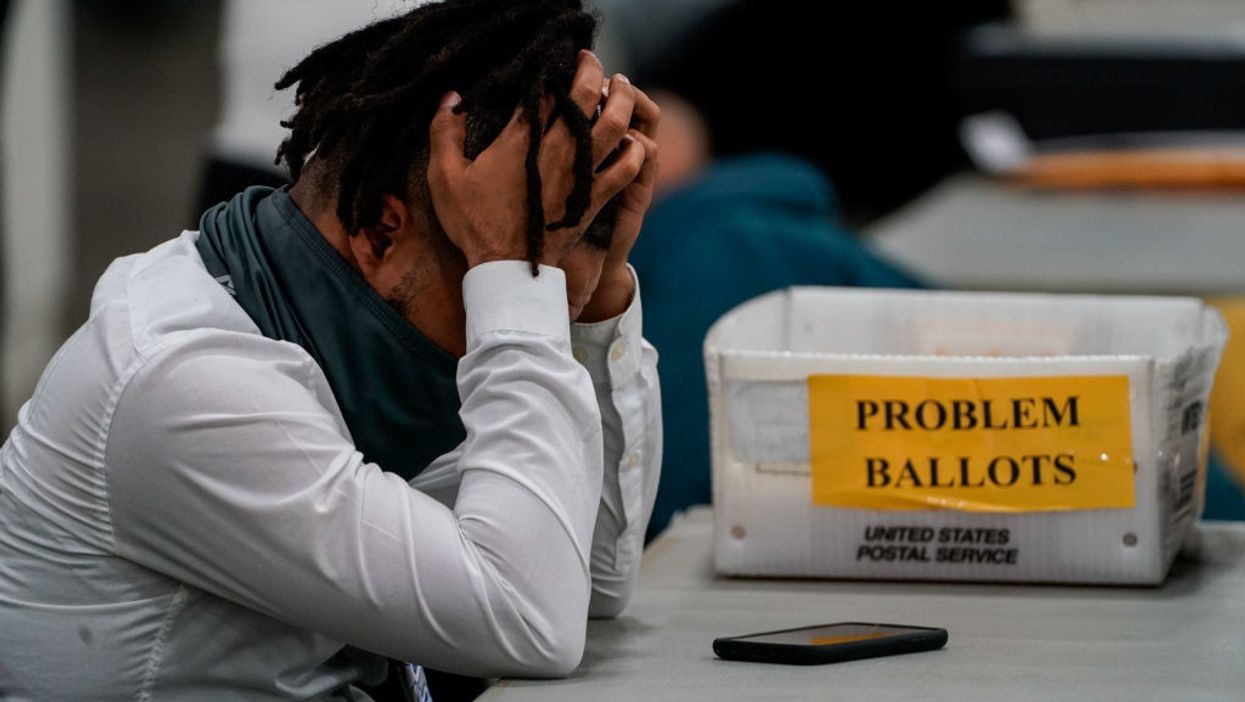 In recent days, the Trump campaign has touted a number of affidavits collected from poll workers in Michigan that they say proves the existence of widespread irregularities in the Michigan vote counting process, and which they plan to attach as an exhibit to an expected lawsuit that will challenge the certification of the vote in Michigan.

The campaign released those affidavits Tuesday to some members of the media (thanks to Brad Heath of Reuters for providing me with a copy). The full .pdf file of exhibits can be read here. I have endeavored to separate the actual allegations of fraud in this post. Keep in mind that, at this point, these are mere allegations that have not been tested by cross-examination or any other form of investigation.

By my count, the 234 pages contain affidavits from 101 individuals. The majority of them appear to be handwritten impressions of the counting process.

Here, by my count, is a complete list of actual allegations that raise the potential of voter fraud from these affidavits:

This list constitutes the entire body of potential actual fraud allegations raised in the affidavits. The testimony contained in these affidavits clearly pertains to fewer than 1,000 total ballots, although it should be noted that numerous affiants complained that they were not able to see what was happening because they were required to maintain six feet of social distance or because people were in their way.

Some (most?) of the allegations in the affidavit concern allegations that GOP poll watchers were treated differently (worse) than Democratic poll watchers, or that the majority of the people in the room were Democrats or were friendlier to the Democrats. Although these allegations are at least potentially relevant politically (albeit they are not tremendously surprising in Wayne County), they do not directly pertain to the issue of voter fraud, so I have not included them in this list, although you may certainly peruse them and draw your own conclusions.

Reading between the lines, some of the frustration experienced by the poll workers and refusal to entertain further complaints may have been come by honestly. The affidavits are rife with complaints about things that were, in fact, done properly and in accordance with the law.

For example, one affiant described at length how she insistently and repeatedly attempted to challenge a group of ballots that had already been placed in a “problem” ballot box (i.e., they had already been successfully challenged). This is, again, not the fault of people who got about 10 minutes of training in the procedures, but you can imagine that the cumulative effect of these challenges (which appear to have been quite voluminous, just based on the people who submitted affidavits) may have led to some short fuses and unwillingness to explain the same thing to each of the 200-plus watchers who were present.

Additionally, a large portion of the affidavits’ contents centers on complaints regarding the counting process and what poll watchers viewed as selective enforcement of social distancing measures like six feet distance and mask wearing. Again, these complaints are in the affidavits and can be perused at leisure, if you are interested. They are not proof of voter fraud.

The affidavits contain many complaints that poll workers were not able to see as well as they would have liked due to having to remain six feet away from the tables due to COVID-19 social distancing measures. Many of the affiants claim that poll workers intentionally blocked their view of certain aspects of the counting process. These claims are difficult to evaluate without having been present in the environment.

I have omitted all of the complaints contained in the affidavits about poll workers being insulted, etc. This behavior should not have occurred, and you can read all about it in the affidavits if you wish. In most cases, it is not clear, however, who leveled the insults, nor what the context of the conversation was. Ultimately, those complaints are beyond the purview of this article.

I have also summarily omitted complaints about the number of poll watchers allowed in the location, and complaints about the boarding up of windows and/or cheering of people who were ejected. By all accounts, including the admission of the Trump campaign, the Trump campaign had more than 130 observers present and on site at the TCF Center during the entire duration of counting. Additionally, the controversy over whether the windows should have been boarded up in order to prevent people outside from filming what was going on inside is not directly relevant to allegations of voter fraud. Probably the most common complaint in the affidavits is from people who were not, in fact, allowed into the counting facility. Ultimately, the argument about how many people should have been allowed in the room is beyond the purview of this article.

I have also omitted some allegations that are, on their own terms, completely unsupported by eyewitness testimony and are mere conjecture on their own terms. For example, one affiant complained that s/he was completely unable to see what was happening with a particular batch of ballots, but then followed that up with a statement of belief that the people s/he could not see were illegally altering ballots.

Additionally, some of the allegations appear to be borne out of failure to understand how the process was supposed to be carried out. For instance, one of the affidavits complains that when the computer identified a “duplicate” ballot (which presumably refers to a situation where someone has voted in person and also requested a mail-in ballot), the ballot was removed from the pile and then passed to the next person at the table. However, that is exactly what was supposed to happen to those ballots: they were supposed to be removed from the rest of the pile and considered as a provisional ballot until a check could be performed to determine whether the mail-in ballot was ever received.

Where an affidavit raises a complaint for which there is an obvious, non-fraud explanation (for instance, the complaints about 1/1/1900 birthdays), or where it complains about things that happened exactly as they should have (e.g., “I observed ballots that should have been duplicated due to being torn, stained or damaged. A supervisor instructed the workers to run damaged ballots through the tabulator and only to duplicate rejected ballots”) I have omitted it. I do not, by the way, blame any of the affiants for raising these issues; many of them make clear that they responded to calls for volunteers on Facebook and received very little training.

Many of the allegations present an incomplete picture, from which it is impossible to draw any conclusions at all. For instance, numerous affiants complained that people who showed up to vote but who had requested a mail-in ballot were allowed to vote. This was proper procedure, and their in-person ballots were supposed to be provisional until it could be determined if they had turned in a mail-in ballot or not. Most of the affiants raising this complaint do note that the ballots were set aside, as is proper, but have no information about what was revealed when these provisional ballots were checked against the mail-in list.

Also, it should be noted that the affidavits contain numerous complaints about lack of security at the counting location, and I have also not included those. Having personally worked as an observer for elections before, I will say that none of the complaints strike me as representing unusual behavior (I don’t recall having my ID checked and I certainly don’t recall being searched or having my belongings searched when I entered a poll location); however, perhaps many of these complaints should lead to reforms in the security process for counting votes.

Notably, many of the affiants also complained about batches of ballots being left unsecured on or underneath tables; however, none of the affidavits contains any testimony about these boxes being tampered or destroyed or added to in any way.

TheBlaze has reached out to officials for the State of Michigan and Wayne County for comment on the issues raised by the affiants.