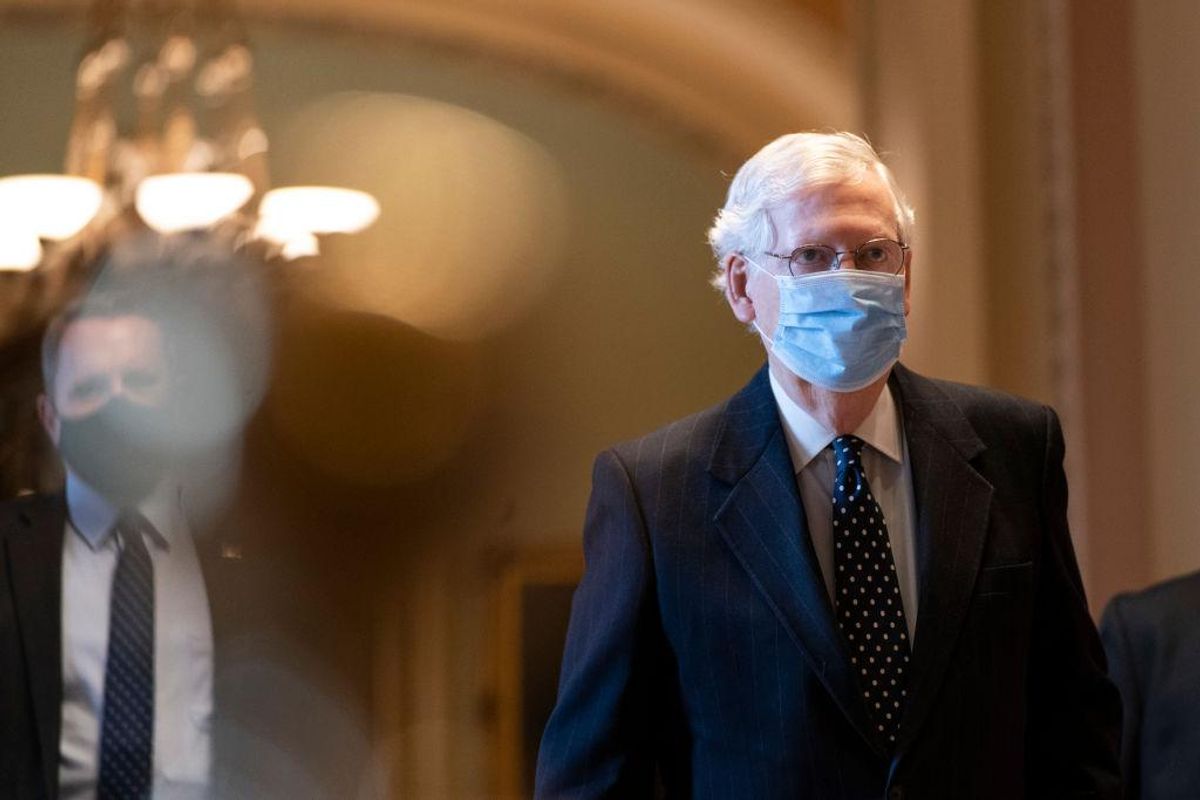 Republican Senate Majority Leader Mitch McConnell (Ky.) reportedly said Wednesday he would not bring back the Senate under emergency circumstances this week to begin a second impeachment trial against President Donald Trump.

On Wednesday — as the House prepared to impeach the president on “incitement of insurrection” charges — McConnell’s office reportedly reached out to incoming Majority Leader Chuck Schumer (D-N.Y.) to inform him that the Senate would not call an emergency session to try Trump on impeachment charges despite urging from Democrats.

The news was first reported by Washington Post reporter Seung Min Kim and was confirmed shortly after by Axios’ Alayna Treene.

The news came just as a Reuters report indicated that Republican leaders in the Senate had met on Wednesday to discuss the possibility of starting the impeachment trial on Friday. Should a trial begin this week, it would raise the potential for the Senate to vote to remove Trump from office before his term ends on Jan. 20.

McConnell had previously cast doubt on the possibility, informing Republican colleagues in a memo that the Senate “will not reconvene for substantive business until Jan. 19, which means the earliest possible date that impeachment trial proceedings can begin in the Senate is the day before President-elect Joe Biden is inaugurated.”

But the New York Times reported Tuesday that the majority leader is “pleased” with Democratic efforts to impeach the president and believes the move could help “purge” the president from the Republican Party. McConnell’s office declined to comment on the report.

The Constitution dictates that a trial is automatically triggered in the Senate when the House of Representatives votes to approve an impeachment resolution. If two-thirds of the Senate then votes to convict on the impeachment charges, the president is formally removed from office.

Given the current numbers, at least 17 Republicans in the Senate would need to vote to convict to find Trump guilty.

On Wednesday, the House convened to vote on single article of impeachment filed against the president, charging that he “willfully incited violence against the government” by rousing a mob of his supporters to storm the U.S. Capitol in protest of a fraudulent election.

A week earlier, as members of Congress convened to certify Biden’s Electoral College victory, Trump spoke to hundreds of thousands of supporters gathered in Washington, D.C., telling them that the election was “rigged” and asking them to march over “to the Capitol building to peacefully and patriotically make [their] voices heard.”

As the crowd approached the Capitol, hundreds of riotous Trump supporters started fighting with police and ultimately stormed into the Capitol Building. The incident resulted in the deaths of at least five people and injuries to several more.

In the aftermath of the riot, lawmakers from both parties have blamed Trump’s rhetoric for the violence, though only a handful of Republicans in either chamber have signified support for impeachment.

HotAir suggested that McConnell likely would have launched the trial early had the Republican votes been there.